You may have noticed the slight buzz  and electric energy around Edinburgh this month. Guess what? It’s time for Edinburgh festivals!!! I was invited to spend a day with Festivals Edinburgh who do a fantastic job in ensuring that Edinburgh remains the world’s leading festival city. Eleven festivals take place throughout the year, five in August alone, so I set out to explore these five fantastic festivals all in one day.

If you looking to ignite your creative mind and or have a fond appreciation of art, then look no further than Edinburgh’s Art Festival. This festival is the largest visual art celebration in the UK and attracts an astounding 250,000 people each year. It encompasses work from established to emerging artists, providing a creative outlet to showcase their extraordinary work. The festival includes over 40 exhibitions, most of which are free to attend and include an assortment of contemporary, fine and abstract art.

Firstly I visited the historic Parliament Hall for the exhibition called ‘The Future is Inside Us, It’s not Somewhere Else’ by Nathan Coley. This was a series of large-scale custom made lightboxes which merge original wallpaper from Zuber & Ice and phrases chosen by the artist. The stunning Parliament Hall provided the perfect backdrop to these thought provoking pieces. 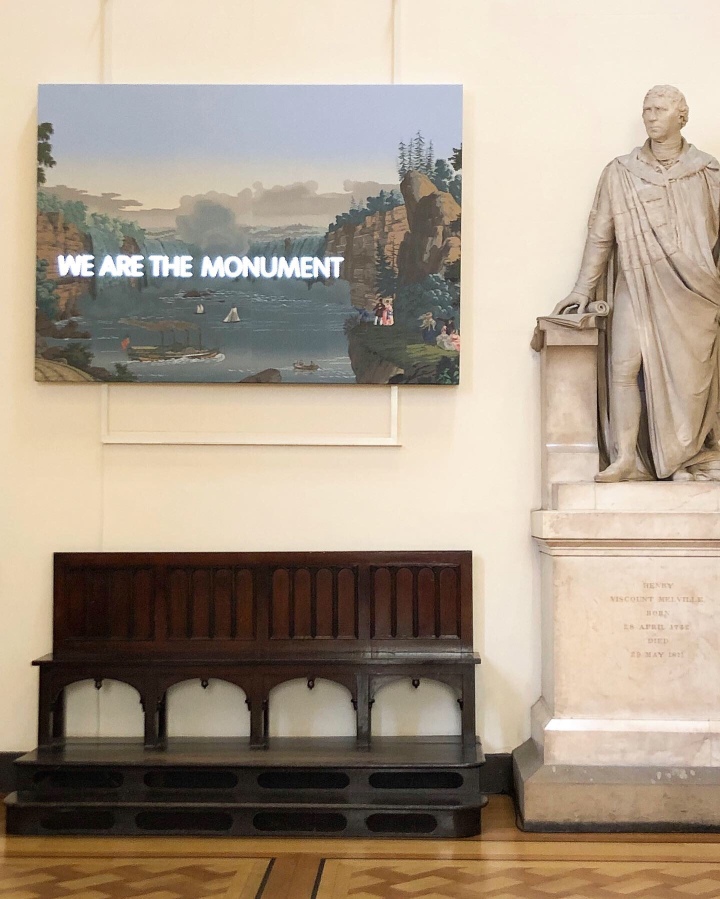 My favourite had to be ‘Looking For Luck’ which was inspired by a story about a South American man travelling with his family across the Mexican/American Border. He was stopped by a journalist who asked him why we was travelling to America and the man replied “I am looking for luck”.

Next I visited Dovecot Studios to explore a selection of tapestries created by the artist, Grayson Perry. The series is called ‘Julie Cope’s Grand Tour’. I absolutely loved this exhibition, the tapestries were vivid, intricate and full of life.

I concluded the Edinburgh Art Festival by visiting the much talked about ‘I Can’t Go On, I’ll Go On’ by Alfredo Jaar. The piece is located on a bridge above West College Street and is said to articulate a perfect metaphor for the era we live in.

The Fringe is the largest arts festival in the world where performers take to the numerous stages and venues (317 in 2018) scattered all over the city. 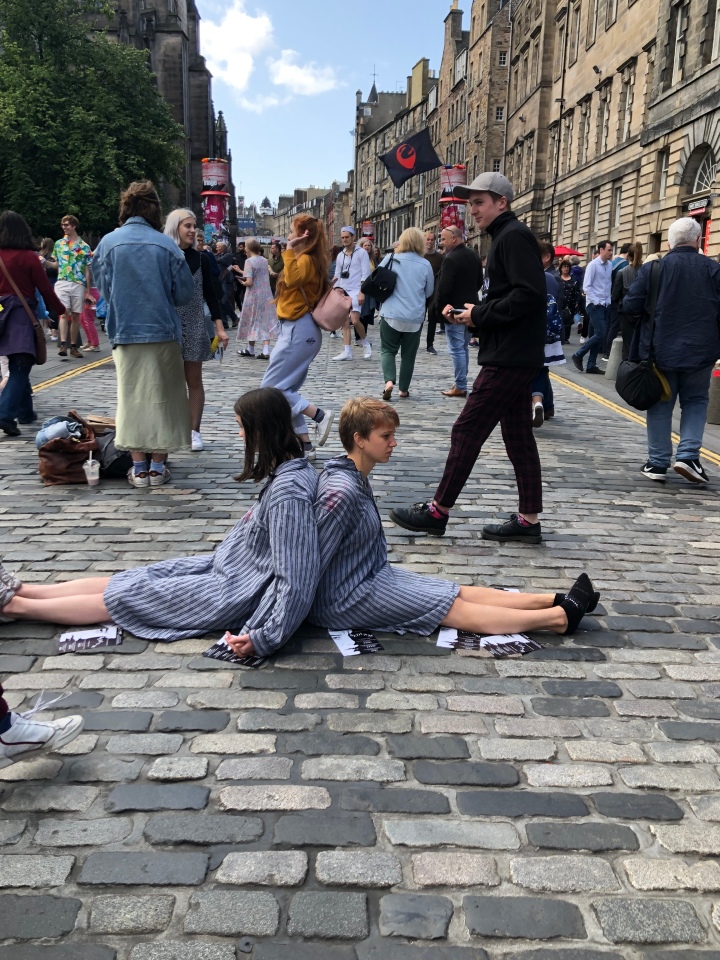 Unlike the Edinburgh International Festival, the Fringe has no selection process and is therefore open to anyone. Performers can present any type of work and then pay a fee to the Fringe. This makes the Fringe an exciting and unpredictable festival, as you never know what to expect. Due to its thrilling manner, The Fringe has given rise to several stars throughout the years. 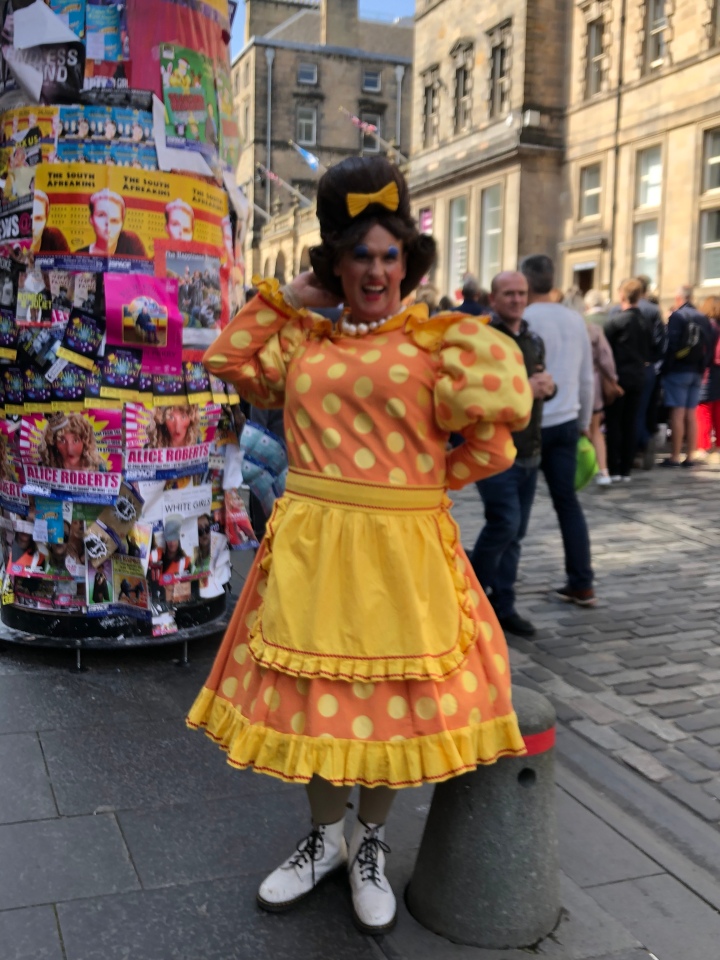 The central area for this festival is located on the Royal Mile. On this charming and historic street you will find an abundance of street performers trying to grab your attention, pop-up stages showcasing some acts and copious amount of promoters handing out leaflets enticing you to the many shows available.

Founded in 1947 to bring people together through culture in the wake of conflict, Edinburgh International Festival invites people from all over the world to perform shows in theatre, dance, music and opera. Over the years this spectacular melting pot of creativity has continued to grow, showcasing some of the finest talent around the globe. These hand-picked shows are spread throughout a number of venues in Edinburgh.

I visited Church Hill Theatre to watch the charismatic show ‘Roots’. The show blends animation and storytelling with a live musical score all whilst telling the fascinating folk tales. This show was very intriguing and cleverly put together. The timing of each of the characters was impeccable and I couldn’t keep my eyes off of the musicians who at some points were playing three instruments at the same time. What made it even more impressive is that there were only four people in the whole show, multi-tasking was definitely one there best skills.

The Royal Edinburgh Military Tattoo is Scotland’s biggest outdoor spectacle, attracting a staggering 220,000 people each year. Located on the esplanade of the iconic Edinburgh castle, over a 1000 military and civilian performers from around the world congregate to perform a show of a lifetime.

With a prime position on the forecourt, I was able to experience this up close and personal. With its multiculturalism effortlessly mixed with traditional Scottish dancing, I must admit it was one of the most amazing experiences I have ever witnessed. I especially loved the performance from the Trinidad and Tobago Defence Force Steel Orchestra who brought a touch of sunshine and vibrancy to the show and the New Zealand Army Band performed their impressive Haka display.

This year’s theme is called Kaleidoscope and is a series of performances with colour and light, comparable to the optical invention which was created by Scottish physicist Sir David Brewster in 1816.

The display of music and dance against Edinburgh Castle is a sight to be seen and should be on everyones bucket list. At the end of the evening I had exclusive access to the roof to witness the spectacular firework finale. 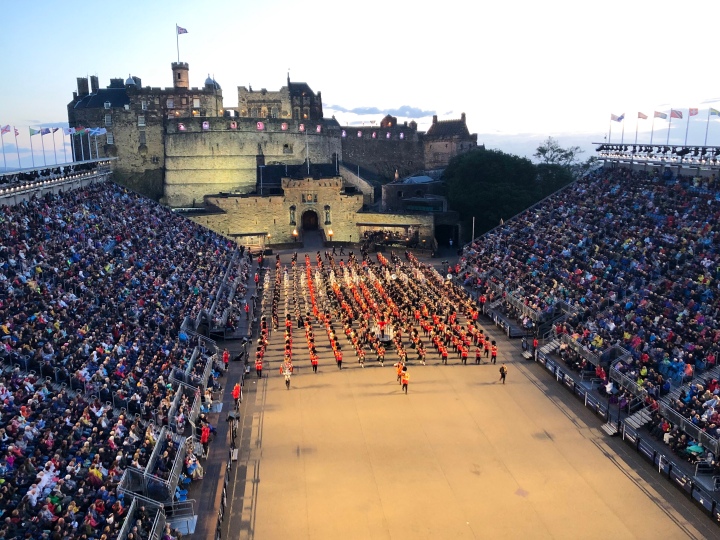 Edinburgh International Book Festival is a celebration of the written word in all its forms and brings together writers from over 60 Countries.

I attended ‘Unbound’, a free event in the Spiegletent which explores poetry in all its glory. All the readings were passionate and witty, taking you on a journey of different emotions.

As I sat in the mist filled ambience of the tent, I looked back on this fantastic day and couldn’t help but feel truly blessed to stay in the heart of the best festival city in the world.

This site uses Akismet to reduce spam. Learn how your comment data is processed.